Haines regularly support medical professionals who travel to third world countries on aid missions. We are pleased to assist them with PPE for themselves and medical supplies to help deliver healthcare in times of extreme stress and hardship.

Right now, Haines are working with The Stables Christian Centre to pack and send a range of medical supplies and furniture to Papua New Guinea.

They are in urgent need of a range of medical products to assist with the impact of COVID, obstetrics, theatre and palliative care.

If you can join us and assist in providing much-needed medical products or funding to ship the products to Papua New Guinea, please visit The Stables Christian Centre's My Cause page.

From Lynne and Sonny from The Stables Christian Church:

"Papua New Guinea is in the grip of a Covid medical crisis which is putting further strain on an already broken medical system. Haines Medical has donated goods for distribution into developing countries and we would like to send a container of donated medical goods as soon as possible. It usually takes us around 12 months to raise the funds but we are wanting to send a container as soon as possible because of the current urgent situation.

Hospitals throughout South Australia have donated expired or decommissioned goods and they have been stored at the Stables ready for transport. The goods are sent in response to wish lists and they are distributed through the towns, villages and rural areas.

Distribution is arranged by people with passion in PNG coordinated by Rumginae Rural Hospital which is the most remote hospital in Papua New Guinea near Fly river in Western Province with one doctor serving a large community.

We are so are so appreciative of any help you can offer. If this story touches your heart, please consider making a donation either by our My Cause page or The Stables Christian Centre bank account." 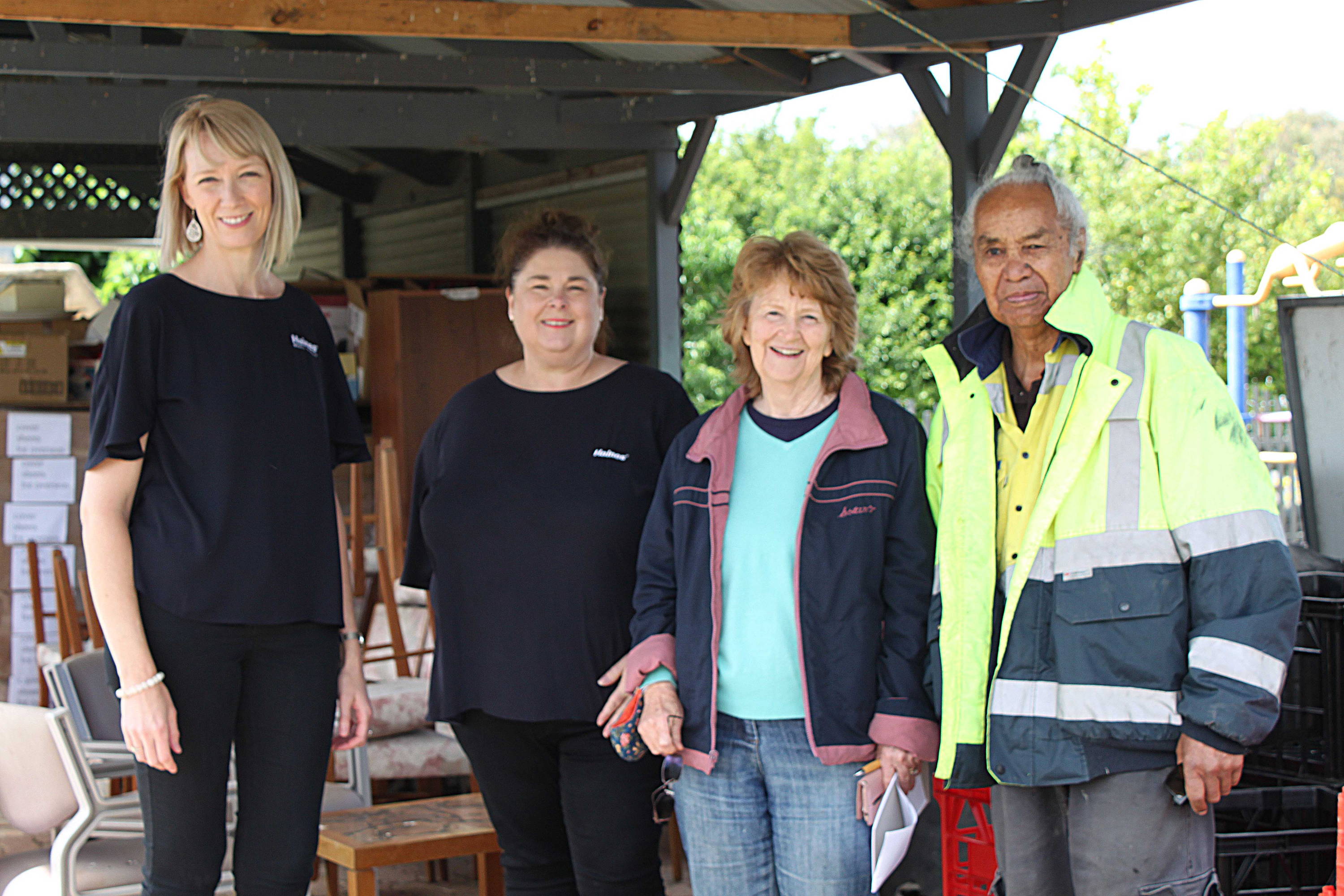 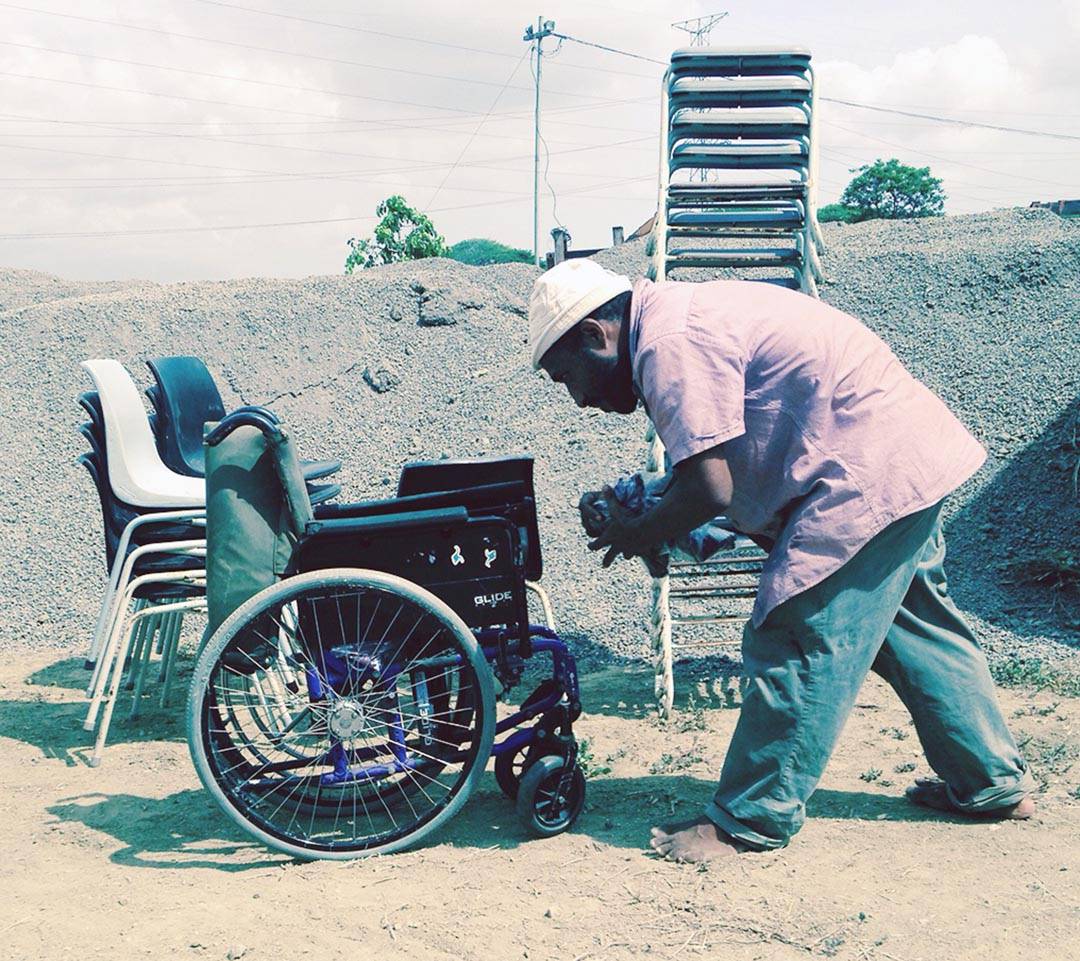 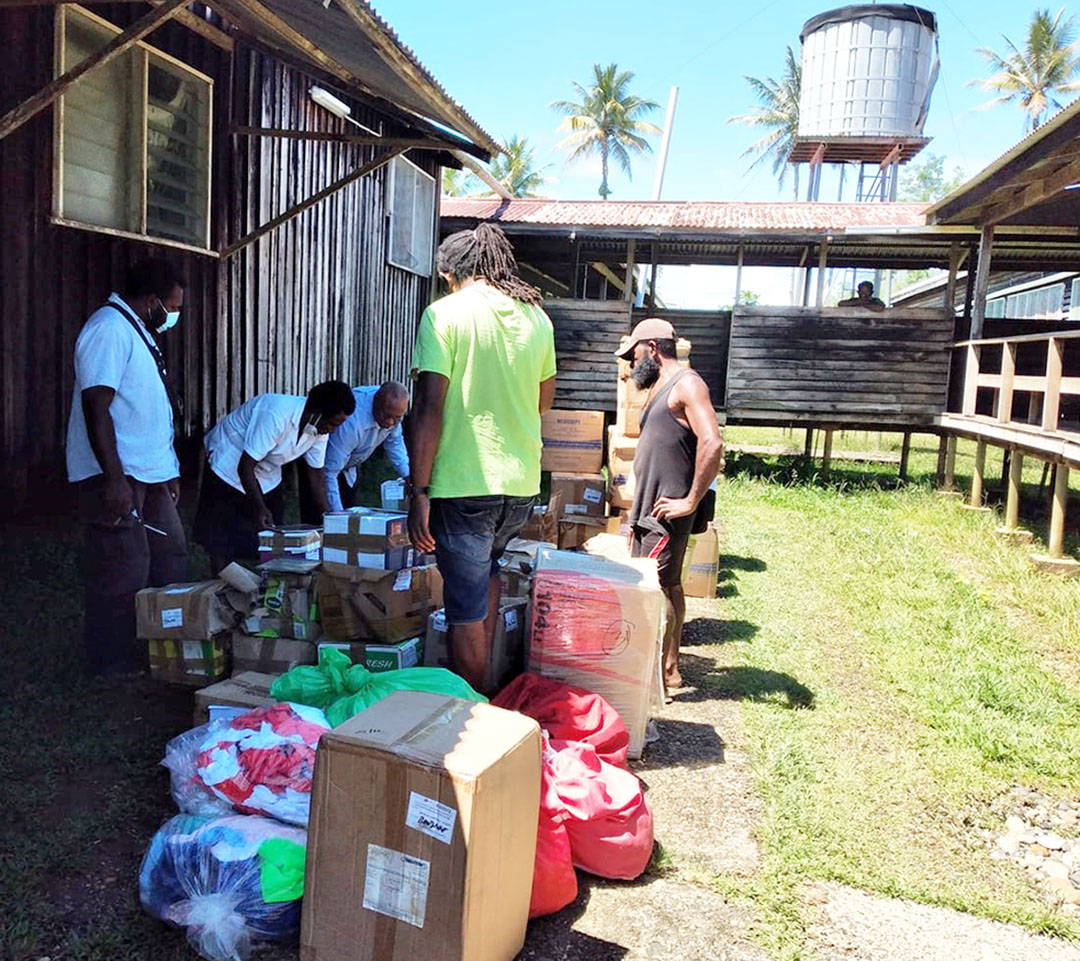 Dr receiving a wheelchair in the last container

Unpacking goods for the hospital 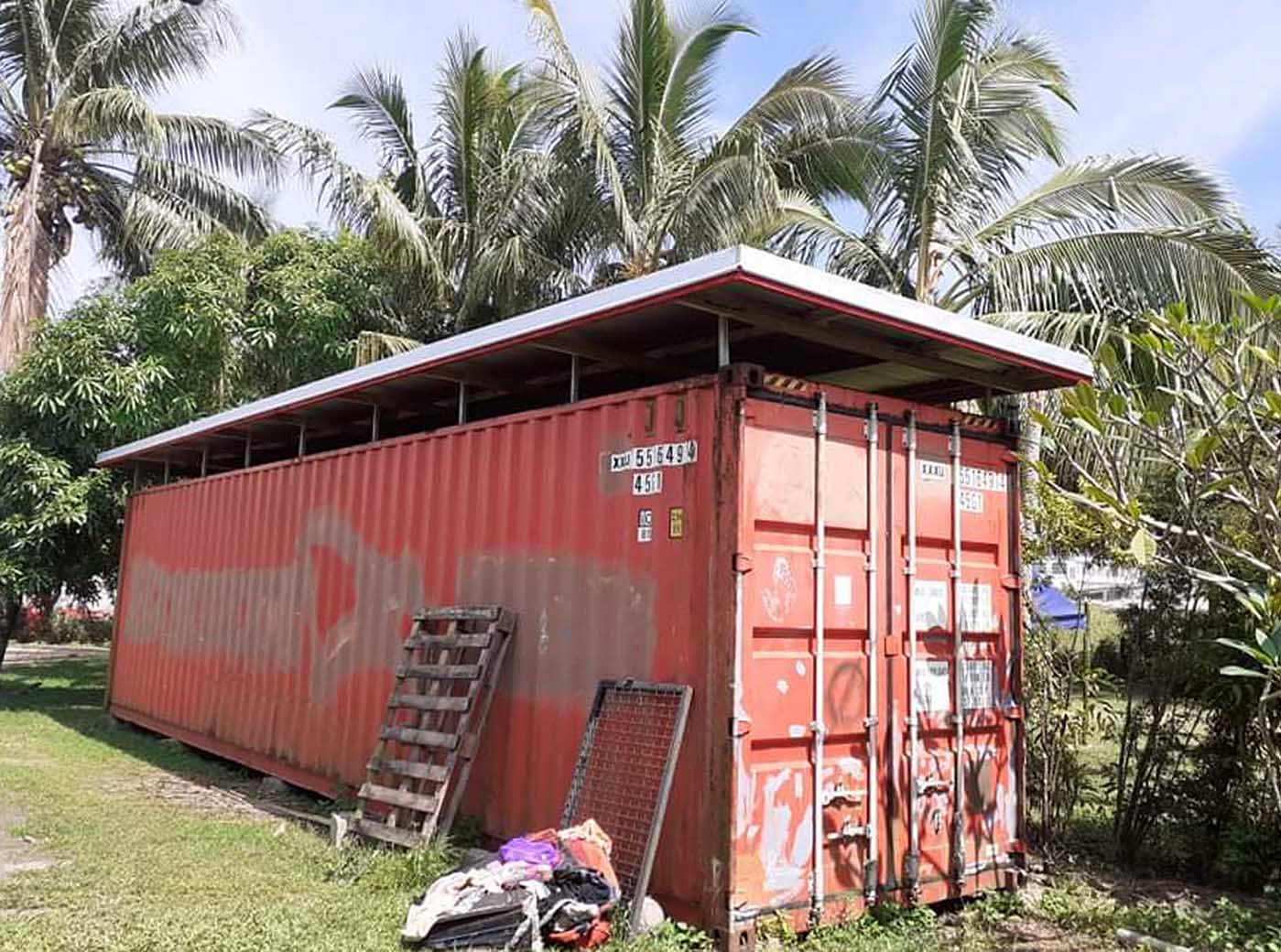 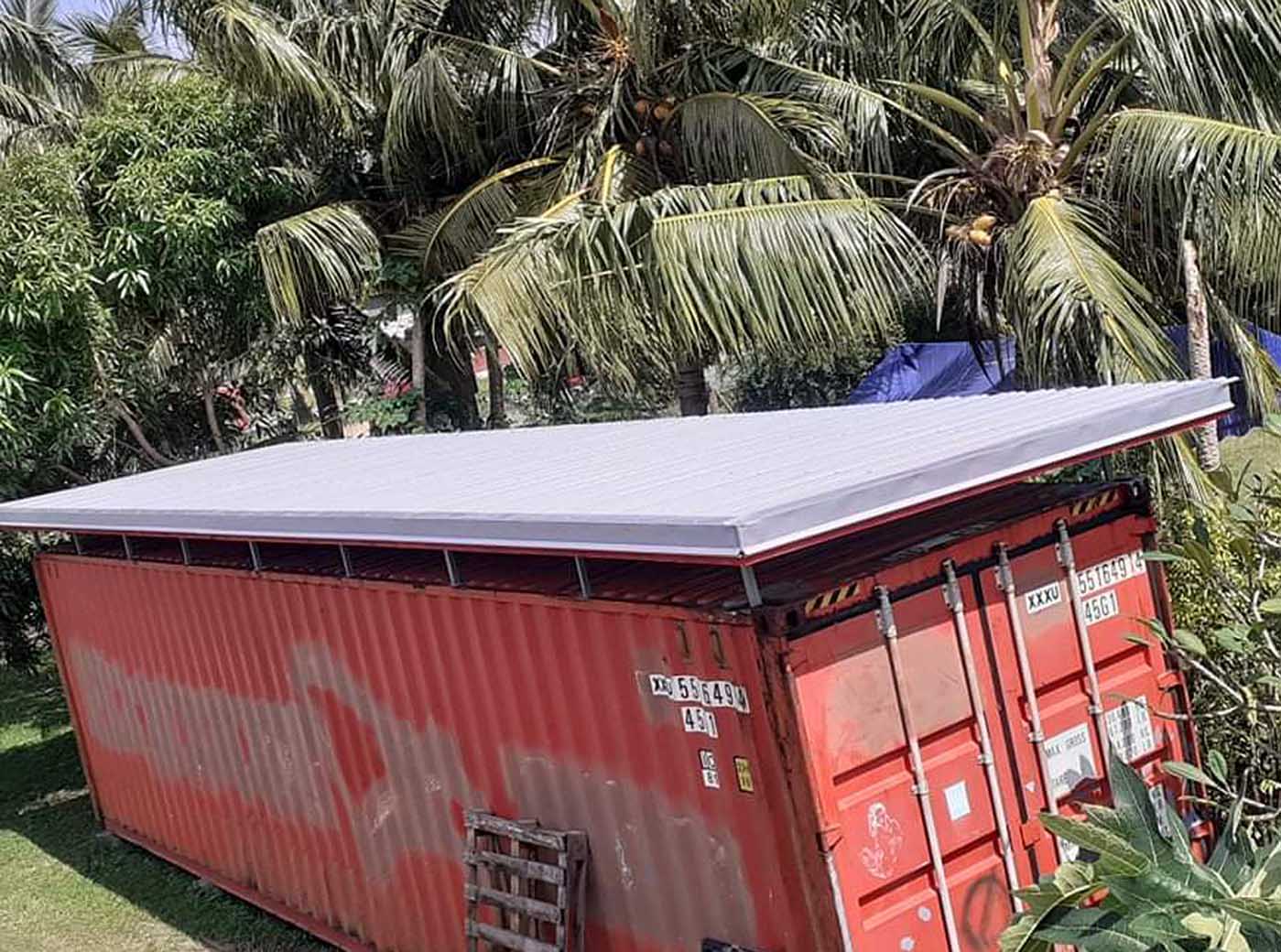 A gift that keeps giving – when we buy and send a container on medical products that container gets turned into housing by the dedicated volunteers.

Stories of the past Haines International Medical Aid Projects

The VIC Health Education Team is located in Melbourne, Australia. The Team began by implementing a Nurse Conference in Ho Chi Minh City (HCMC) in 2003. The continuation of the Conferences has evolved to include several other health care professions. All Team members fund their own visit costs. Currently, the Health Education Team engages with eight major hospitals in HCMC, with each hospital having a specialty health care interest relationship with the Team. In contrast to hospitals in Australia, Vietnamese hospitals are huge. Many have in excess of 1000 beds. For example, Cho Ray has 1700 beds with approximately 3000 patients sharing those beds. One of the maternity hospitals had 51,000 births last year (the Royal Women's’ Hospital in Melbourne had 6,000).

23 team members of the 43 strong team, left together from Melbourne, while other team members had made their own arrangements to include other travel. On arrival at the Tan Son Nhat airport we were surprised at how quickly we passed through passport control to collect all our baggage (approximately 720kg of it)! The rest of the team came in under their own arrangements, either prior to our arrival, or soon after.

The team took 100 Slippery Sally’s with them and they were used to top up the hospitals existing slide sheet supplies (you can never have too many!). The photo shows training initially and then a lady being moved post caesarean section with a slide sheet... with quick to adapt staff in Vietnam it was described as see one transfer, do one transfer, teach one transfer and the staff were off using the slide sheets in the recovery room where they do 100 caesarean sections per day.

It is worth noting that team members not only donate their own time but fund their own visit costs – a great contribution.

If you are interested in participating in these great experiences, please email or their website is www.avvrg.org.au 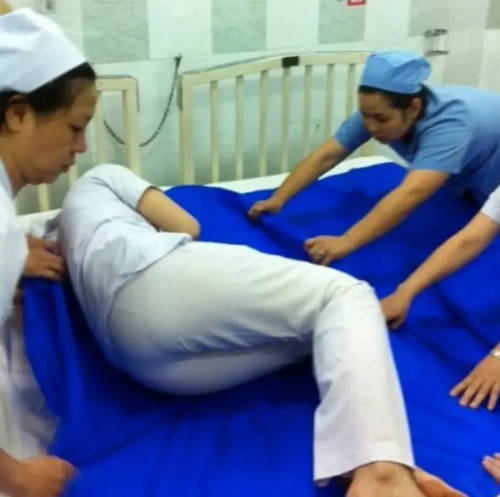 “Whilst they had been away, our new unit was finished and the patients were moved by stretcher to their new hospital beds with proper hospital mattresses, bedside lockers, air conditioning, freshly painted walls and a new floor! I had taken photos of the new ward and had shown the families and patients their new 'home’ and gave them the opportunity to choose their beds. Eve wanted to be close to the door and I asked her to choose the beds for her friends. There was so much excitement amongst the families and staff during the move! Big smiles and laughter! Everyone felt truly energized. The visiting teams of doctors just could not believe it! They were so complimentary about the unit and many said it was like walking into a western ward again and in complete contrast to the Haitian medical environment. All I can say is that a lot of work was involved by an amazing team of people, both Haitian and English (here and in the UK), and it really is lovely to see all our efforts put into practice! It genuinely is a good feeling to know that we are making a difference here. Of course, there are teething problems to anything new and we have certainly had them. There will be more in the future, but at the end of the day, everyone is trying to do their best - given the circumstances.

We have been admitting new patients as the doctors at Milo were keen to discharge theirs because of the worryingly and rapidly increasing wound infection rate there; it is now over 50%. The surgeons there are having to amputate more and more limbs because the external fixations to arms and legs have become grossly infected and gangrenous. What a horrible process for everyone and another issue that the Haitian people will need to accept and address. I have never been in a war zone, but I guess this must be pretty close. With the rainy season on its way, increasingly humid high temperatures, no air conditioning, beds crammed together, minimal if any running water (especially in the field hospital tents) and flies, the infection rate is bound to be high. So our brand spanking new unit with all its amenities and un-cramped conditions was like a gift from God!

To help Fi, Haines Medical donated 100 Slippery Sally slide sheets which at least will make some of the manual handling tasks a little easier. Keep up the great work Fi!

In 2008, Ana and Larna, two occupational therapists from Victoria donated their own time to assist the National Referral Hospital in Honiara in the Solomon Islands.

They provided in-services in manual handling and pressure care management.

They had no slide sheets or developed manual handling guidelines so with some free Slippery Sally’s they were able to greatly assist this hospital’s manual handling practice. 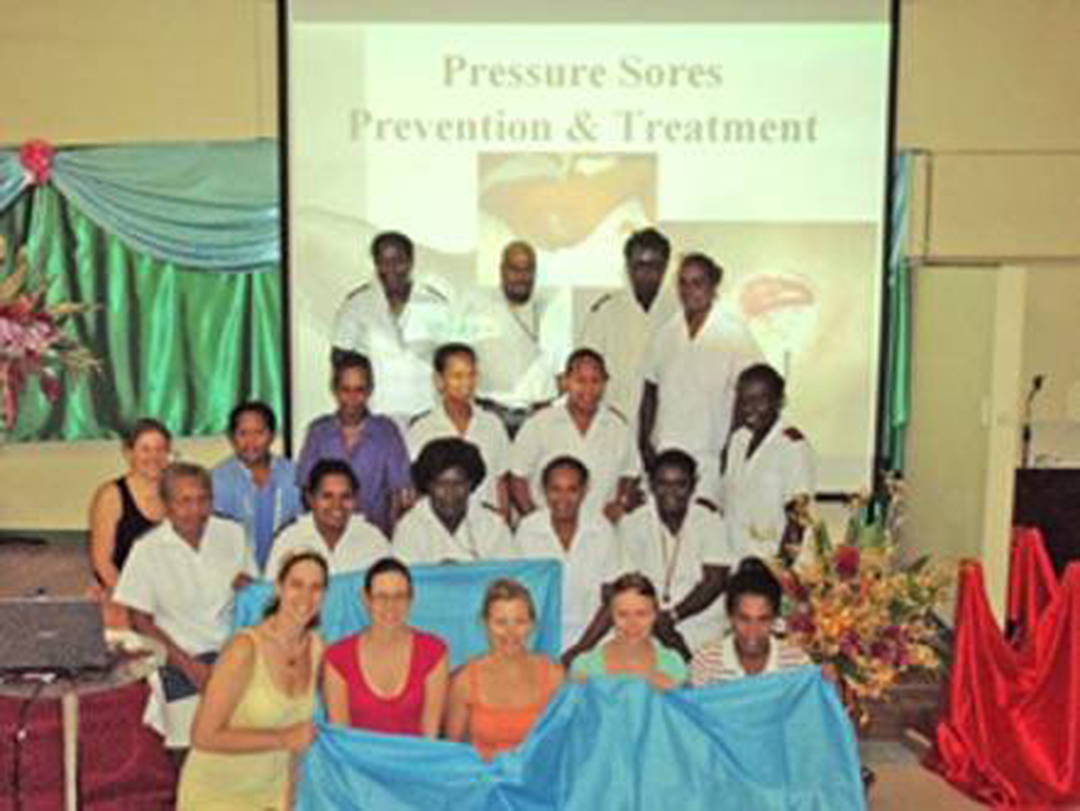 The products you sent to the Home of Compassion have been used far more than within in-services, the slide sheets have been utilized within care management of residents requiring assistance with repositioning.

I would like to thank you again for your generous donations, that has already made a considerable beneficial change to both staff and residents at the Home of Compassion in Suva. 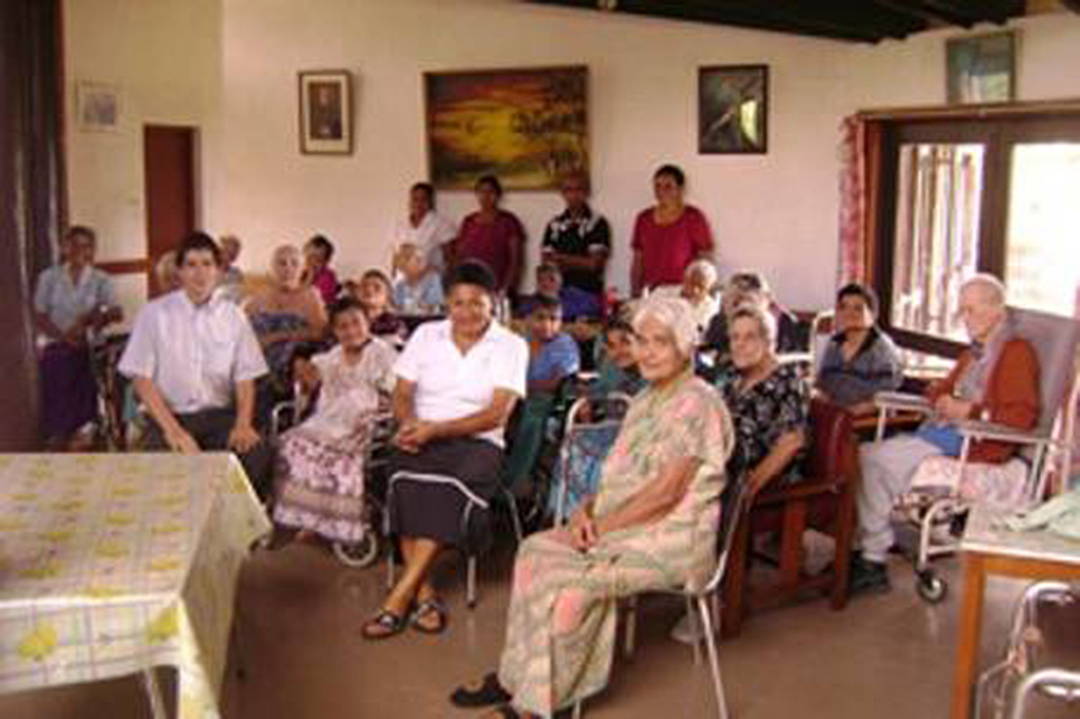 After the Bali bombings in 2002 and 2005, the Australian Government invested significant funds and resources trying to help raise the standards of care within the hospital.

In recent years a number of Australian nurses have been funded by AusAID to work in the new units and to train the local staff. In 2008, AusAID decided not to continue funding any further Australian nurses, so in 2009 support was gained through Australian Volunteers International (AVI) to assist the rest of hospital.

A position of Nurse Educator was created for two years commencing September 2009, this is the role I am currently working in. I am an Australian Registered Nurse employed through Australian Volunteers International. My job is to work with nurses in the hospital to identify areas for improvement, then to develop appropriate educational programs and clinical practices to assist in improving the quality of care. I spent my first few weeks doing an evaluation of clinical care and am now implementing a number of improvement projects.

This project was aimed at improving the safety of staff and patients through the introduction of Slippery Sally Sheets for moving patients.

Within Indonesia there is very low awareness of the risks associated with manual handling and also no systematic way of measuring the adverse consequences to both nurses and patients of poor manual handling practices. Nevertheless, it is clear from current practices that both nurses and patients are regularly being placed at risk of injury through the manual handling practices currently in place. Nurses had received very little training previously about how to lift and move patients safely and over 40% of nursing staff complained of intermittent low back pain. We decided that we needed to introduce an integrated educational program to assist nurses to better manage moving patients in bed and how to take care of their backs at work. We then approached Rotary in Nuhlunbuy in the Northern Territory to ask them if they would be willing to donate some Slippery Sally sheets to the hospital.

In April of 2010 the Rotary Club of Nhulunbuy in the Northern Territory generously purchased 400 meters of Slippery Sally sheets to be donated to Sanglah hospital. There was a lot excitement about this purchase, and we waited keenly for the delivery of the sheets. Unfortunately, none of us had understood the regulations involved in importing the sheets to Indonesia. Suffice to say we ended up involving people at many levels of the Government to no avail. In the end Tim Harkness of Haines Medical Australia came to our rescue and we were able to finally get the sheets into the country (some 5 months after the initial donation!).

Initially we had planned to introduce the sheets into the poor people’s division of the hospital, but thanks to receiving 400 metres of the sheets we have been able to share them across all wards and divisions of the hospital. For many nurses this is the first training that they have received in manual handling, so we have introduced an integrated approach which gives them education about how to care for their back as well as how to lift correctly and to use the sheets. We have had a lot of fun doing this as the attached photos show.

In preparation for the introduction of the sheets we carried out some research into nurses’ levels of fatigue at the end of a shift and have found, since the introduction of the sheets the nurse’s level of fatigue has fallen by 33%. In Australia we take many of these tools that assist us in our work for granted, but in somewhere like Indonesia where they have never had anything like this, these sheets have literally changed the lives of both nurses and their patients. The use of the sheets has been adopted with great enthusiasm and little difficulty. So, from the nurses and patients at Sanglah Hospital we’d like to say a big thank you to both Rotary Nhulunbuy and Haines Medical for persisting when things got tough!

Just added to your wishlist:

My Wishlist
You've just added this product to the cart: